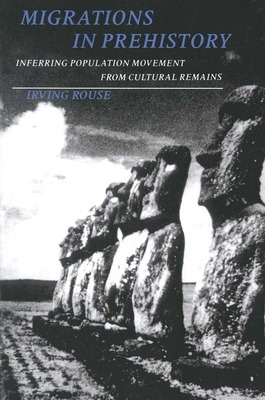 Archaeologists have developed various methods of studying cultural remains to infer population movement and other kinds of migration.  Irving Rouse, author of much distinguished work in this field, here evaluates research on prehistoric migrations and explains why some of these methods have been more successful than others.

Rouse begins with a discussion of the nature and ways of formulating migration hypotheses.  He then focuses on four instances in which migration hypotheses have been successfully formed and tested: studies of the origins of the Polynesians, Eskimos, Japanese, and Tainos (the Indians encountered by Columbus when he discovered the New World).  Contrasting these with popular but essentially fanciful postulations by authors such as Thor Heyerdahl and Barry Fell, Rouse draws conclusions about the methods of testing hypotheses, about kinds of migrations, and about their causes.  He distinguishes between population movement, in which a wave of people from one area overwhelms the inhabitants of another area, and immigration, in which individuals from one area penetrate another and become absorbed into its population.  Rouse argues that population movement must be studied in terms of patterns of change in the culture of the migrants, while immigration should be evaluated in terms of the cultural traits introduced by the migrants.  In performing these tasks, says Rouse, archaeologists should investigate all elements of culture and should check their results against those obtained by linguists and physical anthropologists.

Rouse’s work demonstrates not only the viability of the inference of population movements from archaeological evidence but also the effectiveness of collaboration and communication between branches of archaeology and anthropology.  His book is a lucid exposition of an important issue.

“This is carefully thought out and simply and clearly written treatment of the process, or processes, of migrations in prehistory.  It will be a basic reference for all archaeologists.” –Gordon R. Willey, Peabody Museum of Archaeology and Ethnology, Harvard University