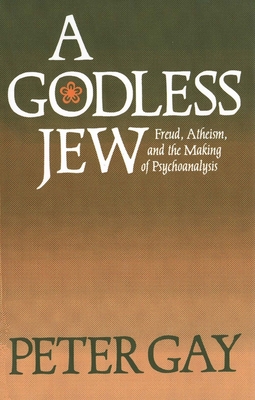 Freud, Atheism, and the Making of Psychoanalysis

“Why did none of the devout create psychoanalysis?  Why did it have to wait for a completely godless Jew?” Freud once asked.  In this book, the eminent historian and Freud scholar Peter Gay enters the long-running controversy about the relationship between religion and psychoanalysis.  Gay takes seriously Freud’s claim that he was an atheist and argues that atheism was an essential stance for the making of psychoanalysis.  He contends, in fact, that Judaism was not essential and that psychoanalysis is not a “Jewish science,” as both anti-Semites and ardent Freudians have often assumed.
Peter Gay begins by discussing why psychoanalysis could only have been conceived by an atheist.  According to him, Freud saw science and religion as absolutely at odds with each other.  While some theologians and analysts have attempted to forge an alliance between psychoanalytic and religious positions, these attempts at accommodation have failed and must fail.  Psychoanalysis is not a religion, and the two comprise wholly incompatible styles of thinking about the world.
Gay then deals with the question of whether Freud’s Jewish background contributed to the creation of psychoanalysis and describes Freud’s secular Judaism: while Freud was very much aware of his Jewishness and was in fact proud of it, this had nothing to do with the making of psychoanalysis itself.  True, Freud himself saw a possible link between his Jewishness and his daring: as a Jew he was treated ass an outsider and therefore, he thought, could approach delicate topics such as sexuality more boldly than he would have if he had been thoroughly lodged on the inside.  However, Gay maintains that this is at best a weak statement.
Writing with his customary wit and charm, Gay not only discusses Freud’s life and personality as they affected his ideas on religion but also compares Freud’s thoughts on religion to those of William James, Charles Darwin, Paul Tillich, and a host of Enlightenment figures.  The result is a book that will richly reward ever reader.