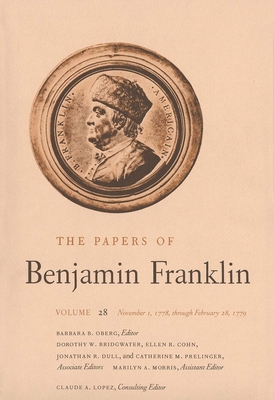 The last two weeks covered by this volume represent a new chapter in Franklin's career: minister plenipotentiary to the French Court. For the first fourteen weeks, however, the work of the American commissioners, Franklin, John Adams, and Arthur Lee, goes on  as usual, although in an atmosphere of uncertainty and distrust as news of the abolishment of the commission reaches Paris in late November. In addition to the bickering within the commissioner designate to Tuscany, continues to irritate Franklin who, in response, writes one of his most brilliant and witty invectives, "The Petition of the Letter Z."
Much of the diplomatic story of this volume concerns the implementation of the Treaty of Alliance and the Treaty of Amity and Commerce. While those documents demonstrate France's support for the American cause, putting them into practice is still to be achieved. American merchants seek French convoy protection for trade to North America, trade that is essential to paying for the war. And owners of privateers seek a resolution of the legal dilemma in which they are caught because of recent French admiralty regulations governing retaken prizes.
But Franklin's role as American minister does not confine him to the world of accounts and routine correspondence. On the contrary, in this volume we see clearly Franklin the American scientist and man of letters in the world of the French Enlightenment. In December, for example, he returns to earlier scientific interests, writing in French a paper on the aurora borealis for presentation to the Académie des sciences. He begins 1779 reinvigorated, productive, and attentive to his new responsibilities.
or
Not Currently Available for Direct Purchase
Copyright © 2020 American Booksellers Association