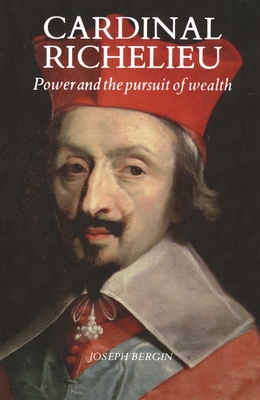 Power and the Pursuit of Wealth

Cardinal Richelieu (1583-1642) did more than anyone else to lay the foundations of the French hegemony in Europe and of absolute monarchy in his own country.  He was a spokesman for power politics, the idea of raison d’état, and the right of rulers to the unquestioning obedience of their subjects.  He was, in addition, one of the richest men in the entire history of France.  Joseph Bergin’s study of his wealth—the first full-scale analysis of the fortune of a leading political figure of the ancient régime—reveals the multiple connections that existed at that time between the tenure of political office and the accumulation of individual and family wealth.
“A brilliant, fascinating, and elegantly written book.”—American Historical Review
“Bergin’s study of Richelieu’s fortune achieves the unexpected feat of adding substantially to our knowledge of one of the most important figures in French history, largely through the exploitation of a group of hitherto unused documents…. Well-constructed and elegantly written…. The book’s great virtue is…that it places Richelieu within the social and economic context of his time.”—Robin Briggs, Times Literary Supplement
“Here is a vivid and fascinating guide to the financial basis of high society in Louis XIII’s France, and a precise account of how Richelieu gained and maintained his position in government…. A meticulous and scholarly examination of the fortune accumulated by one man, it sheds much light on the more general topic of the nature and means of noble wealth and influence in the early seventeenth century.”—Roger Mettam, History Today