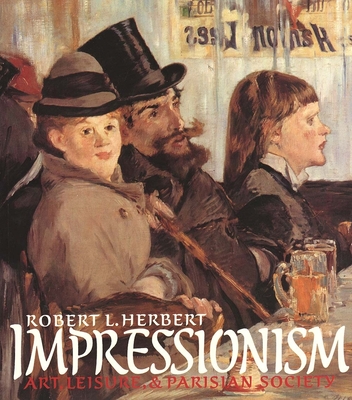 “Long-awaited, this full-scale revision of Impressionism immediately supersedes all other studies in the field.  Herbert rejuvenates even the most famous paintings by seeing them in a dense and flexible context touching on everything from the hierarchy of theater boxes to the role of beer-hall waitresses.  His mind and eye are as supple as his lucid prose, and his command of sociological data is staggering.  In this classic of art history, both art and history are triumphantly reborn.”—Robert Rosenblum, New York University
This remarkable book will transform the way we look at Impressionist art.  The culmination of twenty years of research by a preeminent scholar in the field, it fundamentally revises the conventional view of the Impressionist movement and shows for the first time how it was fully integrated into the social and cultural life of the times.
Robert L. Herbert explores the themes of leisure and entertainment that dominated the great years of Impressionist painting between 1865 and 1885.  Cafes, opera houses, dance halls, theaters, racetracks, and vacations by the sea were the central subjects of the majority of these paintings, and Herbert relates these pursuits to the transformation of Paris under the Second Empire.
Sumptuously illustrated with many of the most beautiful Impressionist images, both familiar and unfamiliar, this book presents provocative new interpretations of a wide range of famous masterpieces.  Artists are seen to be active participants in, as well as objective witnesses to, contemporary life, and there are many profound insights into the social and cultural upheaval of the times.
“A social history of Impressionist art that is truly about the art, informed by a penetrating analysis of the ways in which its pictorial structure and qualities communicate its social content.  Herbert brings that society to life, but above all he makes some of the most familiar and frequently discussed works in the history of art come wonderfully and vividly to life again.”—Theodore Reff, Columbia University
Robert L. Herbert is Robert Lehman Professor of the History of Art at Yale University. He is the author or editor of numerous books and articles on nineteenth-century French art.

"A fresh and penetrating look at the Impressionist painters—in particular, those who identified themselves and their art with Parist and the cultural ferment that began in the eighteen-sixties. . . . This is a thoroughgoing study, a milestone in art and social history."—The New Yorker

"This patient, generous book brings into focus some of the most urgent questions that can be asked about art. If the ultimate test of any critical or scholarly approach is its ability to illuminarity art. . . . Mr. Herbert more than succeeds. Setting the context and then undertaking dense visual analyses with an eye that is rare among art historians, he gives ample evidence of all that social art historians can reveal. This is social art history that does not judge or label but rather considers the ways in which artists gave the experience of conflict pictorial form, the more subtle and profound the formulation, the greater the art history, and the greater the art."—Michael Brenson, New York Times

"In distilling over 20 years' research, Herbert has written that rarity, an absolutely outstanding academic study that is also vividly accessible to the general reader. His lucid exposition is sumptuously illustrated by over 300 plates, most in colour, whose high quality records the most intricate details of brushwork."—Alan Robinson, Times Higher Education Supplement

"Long awaited, Herbert's brilliant book will dominate the study of Impressionism for a generation. . . . Herbert has returned Impressionism to history, placing the pictures within the kaleidoscopic social contexts of Haussmann's rebuilding of Paris, sprawling suburbanization, the capitalization of leisure. His method is to fuse intricate, sophisticated picture analysis with socio-historical material, a delicate operation that has defeated others. Herbert handles it remarkably.
Impressionism is a big book in every respect. Lavishly and magnificently illustrated, it is a rich seam of historical and pictorial analysis, a varied yet controlled pattern of approaches, imaginative and enthusiastic, dense and inventive. One will return to it again and again."—Richard Thomson, Art International

"Herbert's alert eye first seeks an anecdote to explain the poses of the players in a scene, lingers convincingly over the structure, color, and brushwork, and finally consolidates the painting into a larger vision of the society."—Roger Shattuck, New Republic

"Herbert's approach in this richly informative and very wise book has yielded enormous rewards upon which we will draw for a long time to come. He has provided us with the full-scale social and formal history of Impressionism that we have lacked until now. But its value goes beyond that considerable accomplishment, for by carrying out his project in so thorough and lucid a fashion, he permits us to examine the ways in which he proceeds and prompts us to ask once again questions that are of the utmost importance for the history of art."—Joel Isaacson, Art Journal

"Throughout Impressionism the reader is struck by Herbert's ability to see and describe. . . . Herbert demonstrates that it is still possible to think synthetically, to write with clarity and style, with an appreciation of the impact of industrialization on modern culture and compassion for the human suffering it often entails."—John Hutton, French Politics and Society

Robert L. Herbert is professor of art at Mount Holyoke College.
Loading...
or
Not Currently Available for Direct Purchase