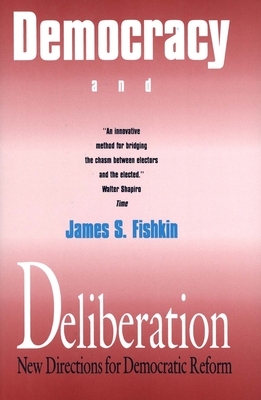 This book proposes a new kind of democracy for the modern era, one that not only gives citizens more power but also allows them more opportunities to exercise this power thoughtfully. James S. Fishkin here suggests an innovative solution to the problem of inadequate deliberation, in particular within our presidential nomination system. His reform involves a well-publicized national caucus in which a representative sample of American citizens would interact directly with presidential contenders in order to reflect and vote on the issues and candidates.

In adapting democracy to the large scale nation state, says Fishkin, Americans have previously had two choices. They could participate directly through primaries and referenda or they could depend on elite groups—such as party conventions and legislatures—to represent them. The first choice offers political equality but little chance for deliberation; the second offers the participants an opportunity to deliberate but provides less political equality for the electorate.

The national caucus that Fishkin proposes—an example of what he calls a “deliberative opinion poll”—combines deliberation with political equality and reveals what the public would think if it had better conditions and information with which to explore and define the issues with the candidates. Arguing persuasively for the usefulness of deliberative opinion polls, Fishkin places them within the history of democratic theory and practice, exploring models of democracy ranging form ancient Athens and the debates of the American founders to contemporary transitions toward democracy in Eastern Europe.