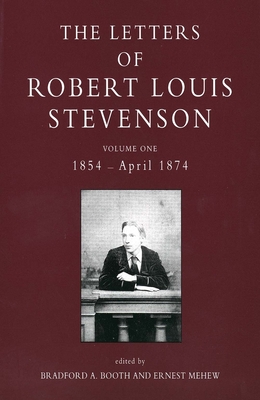 Robert Louis Stevenson, celebrated author of such treasured classics as Treasure Island, Kidnapped, and The Strange Case of Dr. Jekyll and Mr. Hyde, has long been recognized as a master storyteller and essayist. But he was also a delightful and instructive letter writer. Now, in the centenary of his death, Yale University Press is publishing the definitive edition of Stevenson's collected letters in eight handsomely produced volumes. The edition will contain nearly 2800 letters; only 1100 have been published before, and many of these were abridged or expurgated.
The letters make fascinating reading, not only for those interested in Stevenson's life and work but also for everyone interested in nineteenth-century literature and social history.
The letters in volumes I and II, which cover the years from 1854 to 1879, reveal Stevenson's struggles to achieve success as an author. We learn of his years as a student, his work, and his travels. We meet the people who became his chief correspondents for the rest of his life, including Sidney Colvin, who was to be his literary mentor and lifelong friend; the poet and critic W.E. Henley; and Fanny Osbourne, who later became Stevenson's wife. During this period Stevenson published stories and essays and two books, An Inland Voyage and Edinburgh: Picturesque Notes, and set off on the journey to the Cevennes later immortalized in his famous Travels with a Donkey.
Ernest Mehew's introduction and detailed annotation place the letters in a biographical framework that gives a chronology of Stevenson's life; explains his family background; and identifies the people he met, the literary projects he planned, and the contemporary events to which he refers.

Bradford A. Booth, who was professor of English at the University of California at Los Angeles and died in 1968, began the work on this edition. Ernest Mehew, who has worked on this edition for more than twenty years, is widely recognized as the leading authority on Stevenson's life and work.
or
Not Currently Available for Direct Purchase