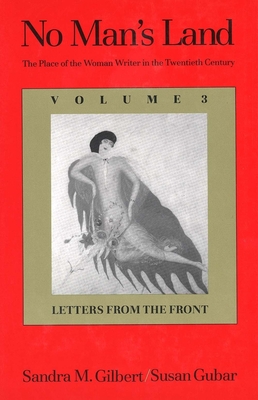 The Place of the Woman Writer in the Twentieth Century, Volume 3: Letters from the Front

How do writers and their readers imagine the future in a turbulent time of sex war and sex change? And how have transformations of gender and genre affected literary representations of "woman," "man," "family," and "society"?

This final volume in Gilbert and Gubar's landmark three-part No Man's Land: The Place of the Woman Writer in the Twentieth Century argues that throughout the twentieth century women of letters have found themselves on a confusing cultural front and that most, increasingly aware of the artifice of gender, have dispatched missives recording some form of the "future shock" associated with profound changes in the roles and rules governing sexuality.

Divided into two parts, Letters from the Front is chronological in organization, with the first section focusing on such writers of the modernist period as Virginia Woolf, Zora Neale Hurston, Edna St. Vincent Millay, Marianne Moore, and H.D., and the second devoted to authors who came to prominence after the Second World War, including Gwendolyn Brooks, Sylvia Plath, Margaret Atwood, Toni Morrison, and A.S. Byatt.

Embroiled in the sex antagonism that Gilbert and Gubar traced in The War of the Words and in the sexual experimentations that they studied in Sexchanges, all these artists struggled to envision the inscription of hitherto untold stories on what H.D. called "the blank pages/of the unwritten volume of the new." Through the works of the first group, Gilbert and Gubar focus in particular on the demise of any single normative definition of the feminine and the rise of masquerades of "femininity" amounting to "female female impersonation." In the writings of the second group, the critics pay special attention to proliferating revisions of the family romance—revisions significantly inflected by differences in race, class, and ethnicity—and to the rise of masquerades of masculinity, or "male male impersonation."

Throughout, Gilbert and Gubar discuss the impact on literature of such crucial historical events as the Harlem Renaissance, the Second World War, and the "sexual revolution" of the sixties. What kind of future might such a past engender? Their book concludes with a fantasia on "The Further Adventures of Snow White" in which their bravura retellings of the Grimm fairy tale illustrate ways in which future writing about gender might develop.