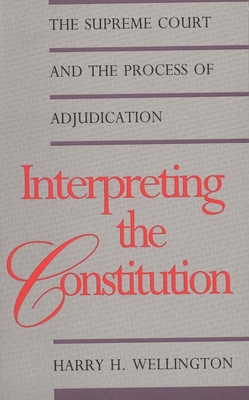 How does the Supreme Court work? Is there something undemocratic about having unelected judges overturn laws passed by elected legislators? How can a brief, two-hundred-year old constitution continue to provide the fundamental law for governing the United States? In this book a prominent legal scholar explores these questions with unusual clarity. Harry H. Wellington discusses judicial review (the process by which the court decides whether laws are valid) and the interpretive role the court plays in constitutional regulation and the resolution of individual disputes. Written in an engaging and accessible manner, the book offers fascinating examples of the court at work, in particular showing how it has addressed one of the most controversial political and judicial issues of our time—abortion.

Harry H. Wellington takes a frank and provocative look at the process of adjudication, showing how it incorporates and shapes public values and mores as they change from one generation to the next. He explains why democracies can tolerate judicial review by nonelected officials and he refutes the politically popular doctrine of “original intent” and explains why those who interpret the Constitution must be responsive to precedent and process. Wellington also shows how the American political system allows the public to respond to the Court’s decisions on such strongly debated issues as abortion. Although he argues for the retention of Roe v. Wade, Wellington points out that the Court makes mistakes, and he asserts that institutions, groups, and individuals sometimes have an obligation to contest the court’s readings and its authority. This often noisy dialogue, says Wellington, is necessary to make judicial regulation compatible with the democratic ideology on which the United States is based.