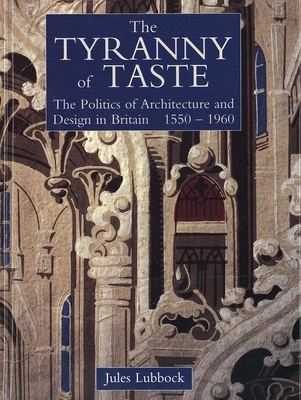 The Tyranny of Taste (Hardcover)

The Politics of Architecture and Design in Britain, 1550-1960 (The Paul Mellon Centre for Studies in British Art)

How do countries acquire their distinctive features and appearance, their look or style? In this stimulating book, Jules Lubbock answers this question by focusing on Britain, with its characteristic terraced houses, Georgian squares, postwar slab blocks, and Victorian floral ornamentation. Lubbock traces the fierce debates over consumerism, good design, and town planning that have raged in Britain since the Elizabethan period, investigating how the design of buildings and possessions—domestic as well as official—becomes an issue of public policy and controversy.

Lubbock discusses the ideas, policies, and motivations of designers and commentators from 1550 to the present, including such figures as Charles I, Inigo Jones, Joseph Addison, Pope, Hogarth, Pugin, Dickens, Ruskin, and Le Corbusier. He describes the growing public awareness that taste and beauty are related to economic growth, that there is what he calls a political economy of design. He shows, for example, that London was shaped by a desire to control its expansion in order to maintain social stability in the face of the developing industrial and commercial revolution; that Puritans believed that the high consumption of luxury goods essential to prosperity could be made morally acceptable through good design; and that the court of James I consciously adopted classicism as the appropriate style for the newly joined kingdoms of England and Scotland. Lubbock shows the different ways in which architecture, design, planning, and style were believed to contribute to a "Good Society." He suggests that the political economy of design was not only viable in the past but can also provide an essential framework for the future.

Jules Lubbock is lecturer in art history and theory at the University of Essex.
or
Not Currently Available for Direct Purchase
Copyright © 2020 American Booksellers Association