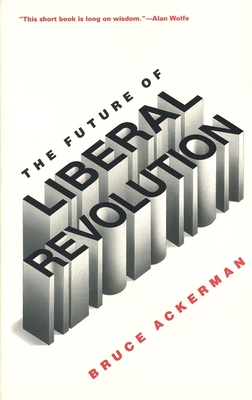 The Future of Liberal Revolution

Since 1989, the Cold War has ended, new nations have emerged in Eastern Europe, and revolutionary struggles to establish liberal ideals have been waged against repressive governments throughout the world. Will the promise of liberalism be realized? What can liberals do to make the most of their opportunities and construct enduring forms of political order?

In this important and timely book, a leading political theorist discusses the possibility of liberal democracy in Western and Eastern Europe and offers practical suggestions for its realization. Bruce Ackerman begins by sketching the challenges faced a Western Europe free for the first time in half a century to determine its own fate without the constant intervention of the United States and the Soviet Union. Unless decisive steps are taken, this moment of promise can degenerate into a new cycle of nationalist power struggle. Revolutionary action is now required to build the foundations of a democratic federal Europe—a union strong enough to keep the peace and to combat the threat of local tyrannies.

Ackerman next considers Eastern Europe and discusses fundamental problems overlooked in the rush to build market economies there. He points out that leading countries—including Poland, Hungary, and Russia—have yet to establish new constitutions, contenting themselves instead with hasty amendments to old Communist documents. This is a great mistake, says Ackerman, for there is an urgent need to constitutionalize liberal revolution, and the window of opportunity for doing this is far smaller than many people realize. Neither judicial efforts to punish collaborators with the old regimes and to redress wrongs done to their victims nor the judicial activism now sweeping Eastern Europe should take priority over the formulation of democratically legitimated constitutions. Ackerman concludes by considering the impact of 1989 on South Africa, Latin America, and the United States, exploring how decisive liberal action throughout the world can help to expand the range of functioning constitutional democracies and recover liberalism's lost revolutionary heritage. .