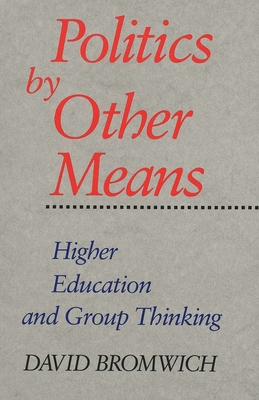 Politics by Other Means

Liberal education has been under siege in recent years. Far-right ideologues in journalism and government have pressed for a uniform curriculum that focuses on the achievements of Western culture. Partisans of the academic left, who hold our culture responsible for the evils of society, have attempted to redress imbalances by fostering multiculturalism in education. In this eloquent and passionate book a distinguished scholar criticizes these positions and calls for a return to the tradition of independent thinking that he contends has been betrayed by both right and left. Under the guise of educational reform, says David Bromwich, these groups are in fact engaging in politics by other means.

Bromwich argues that rivals in the debate over education have one thing in common: they believe in the all-importance of culture. Each assumes that culture confers identity, decides the terms of every moral choice, and gives a meaning to life. Both sides therefore see education as a means to indoctrinate students in specific cultural and political dogmas. By contrast, Bromwich contends that genuine education is concerned less with culture than with critical thinking and independence of mind. This view of education is not a middle way among the political demands of the moment, says Bromwich. Its earlier advocates include Mill and Wollstonecraft, and its roots can be traced to such secular moralists as Burke and Hume.

Bromwich attacks the anti-democratic and intolerant premises of both right and left—premises that often appear in the conservative guise of "preserving the tradition" on the one hand, or the radical guise of "opening up the tradition" on the other. He discusses the new academic "fundamentalists" and the politically correct speech codes they have devised to enforce a doctrine of intellectual conformity; educational policy as articulated by conservative apologists George Will and William Bennett; the narrow logic of institutional radicalism; the association between personal reflection and social morality; and the discipline of literary study, where the symptoms of cultural conflict have appeared most visibly. Written with the wisdom and conviction of a dedicated teacher, this book is a persuasive plea to recover a true liberal tradition in academia and government—through independent thinking, self-knowledge, and tolerance of other points of view.

David Bromwich, professor of English and director of the Whitney Humanities Center at Yale University, has written widely on literature and politics. His books, Hazlitt: The Mind of a Critic and A Choice of Inheritance: Self and Community from Edmund Burke to Robert Frost, were nominated for National Book Critics Circle Awards in Criticism.
Loading...
or support indie stores by buying on