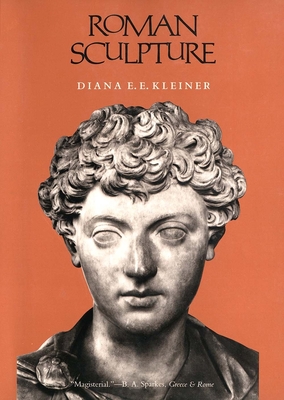 Roman Sculpture (Yale Publications in the History of Art)

Roman sculpture was an integral part of Roman life, and the Romans placed statues and reliefs in their fora, basilicas, temples, and public baths, as well as in their houses, villas, gardens, and tombs. In this beautifully illustrated book—the first in almost a century devoted solely to Roman sculpture—Diana E. E. Kleiner discusses all the major public and private monuments in Rome, as well as many less well known monuments in the capital and elsewhere in the empire. She examines art commissioned by the imperial elite and by private patrons, including freedmen and slaves, and she also highlights monuments honoring women and children. Kleiner demonstrates that the social, ethnic, and geographical diversity of Roman patronage led to an art that was eclectic and characterized by varying styles, often tied to the social status of the patron. She also examines the interrelations between works produced for different kinds of patrons.

Kleiner begins with a long thematic introduction that describes Rome and its empire, characterizes patrons from the capital and the provinces, discusses the position of the artist in Roman society and the materials he used, and presents a history of the study of Roman art. The remaining chapters constitute a chronological examination of Roman sculpture from the foundation of Rome in 753 B.C. to the transfer of the capital to Constantinople in A.D. 330. In each period the monuments are divided by type, for example, portraiture, state relief sculpture, the art of freedmen, and provincial art. Throughout, Kleiner treats Roman sculpture in its cultural, political, and social contexts and, wherever possible, as an element of the architectural complex in which it was set.

Diana E. E. Kleiner is Dunham Professor of History of Art and Classics at Yale University.
Loading...
or
Not Currently Available for Direct Purchase