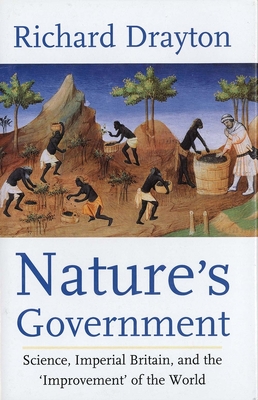 Science, Imperial Britain and the ’Improvement’ of the World

Nature’s Government is a daring attempt to juxtapose the histories of Britain, Western science, and imperialism. It shows how colonial expansion, from the age of Alexander the Great to the twentieth century, led to more complex kinds of knowledge. Science, and botany in particular, was fed by information culled from the exploration of the globe. At the same time science was useful to imperialism: it guided the exploitation of exotic environments and made conquest seem necessary, legitimate, and beneficial.

Richard Drayton traces the history of this idea of “improvement” from its Christian agrarian origins in the sixteenth century to its inclusion in theories of enlightened despotism. It was as providers of legitimacy, as much as of universal knowledge, aesthetic perfection, and agricultural plenty, he argues, that botanic gardens became instruments of government, first in continental Europe and then, by the late eighteenth century, in Britain and the British Empire.

At the Royal Botanic Gardens at Kew, the rise of which throughout the nineteenth century is a central theme of this book, a pioneering scientific institution was added to a spectacular ornamental garden. At Kew, “improving” the world became a potent argument for both the patronage of science at home and Britain’s prerogatives abroad. This book provides a portrait of how the ambitions of the Enlightenment shaped the great age of British power and how empire changed the British experience and the modern world.