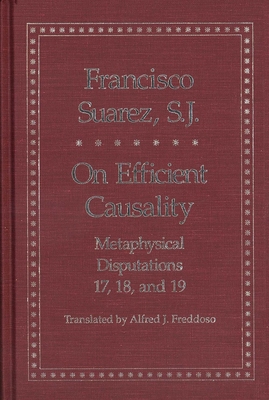 The Spanish Jesuit Francisco Suarez (1548-1617) was an eminent philosopher and theologian whose Disputationes Metaphysicae was first published in Spain in 1597 and was widely studied throughout Europe during the seventeenth century. The Disputationes Metaphysicae had a great influence on the development of early modern philosophy and on such well-known figures as Descartes and Leibniz. This is the first time that Disputations 17, 18, and 19 have been translated into English.

The Metaphysical Disputations provide an excellent philosophical introduction to the medieval Aristotelian discussion of efficient causality. The work constitutes a synthesis of monumental proportions: problematic issues are lucidly delineated and the various arguments are laid out in depth. Disputations 17, 18, and 19 deal explicitly with such issues as the nature of causality, the types of efficient causes, the prerequisites for causal action, causal contingency, human free choice, and chance.