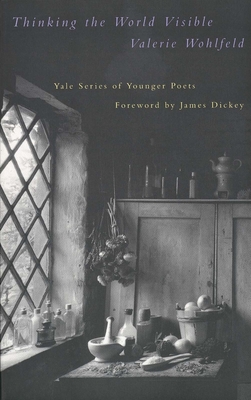 The winning volume in the 1993 Yale Series of Younger Poets competition is Thinking the World Visible, by Valerie Wohlfeld. As James Dickey, distinguished poet and judge of the competition, has said, "Valerie Wohlfeld's words give the sense of a poet whose mind has been suddenly freed and is active in a new way. My impression of her is as a spirit-woman, a female shaman or Eve who takes power over the natural world by naming it, using the same words that have always served but with her own truly imaginative angle of vision."

Valerie Wohlfeld, born in Sacramento, California, in 1956, spent portions of her childhood in American Samoa and Ecuador. She was educated at American University and Sarah Lawrence College and received an M.F.A. from Vermont College in 1983. Wohlfeld's poems have appeared in a number of periodicals, including The New Yorker, Poetry, Pequod, Agni Review, and Western Humanities Review.
Loading...
or support indie stores by buying on