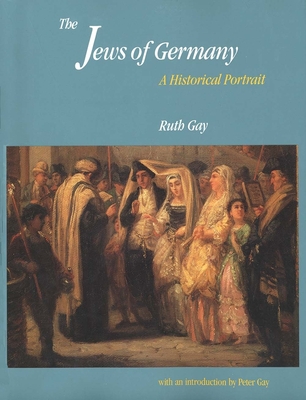 The Jews of Germany

This unique book provides a panoramic overview of a now extinct culture: the 1500-year history of the Jews in Germany. Through texts, pictures, and contemporary accounts, it follows the German Jews from their first settlements on the Rhine in the fourth century to the destruction of the community in World War II. Using both voices and images of the past, the book reveals how the German Jews looked, how they lived, what they thought about, and what others thought of them.

Ruth Gay's text, interwoven with passages from memoirs, letters, newspapers, and many other contemporary sources, shows how the German Jews organized their communities, created a new language (Yiddish), and built their special culture—all this under circumstances sometimes friendly, but often murderously hostile. The book explores the internal debates that agitated the community from medieval to modern times and analyzes how German Jewry emerged into the modern world. The earliest document in the book is a fourth-century decree by the Roman emperor Constantine permitting Jews to hold office in Cologne. Among the last are poignant letters from Betty Scholem in Berlin, writing during the Nazi years to her son Gershom in Palestine. In between are accounts of a ninth-century Jewish merchant appointed by Charlemagne to a diplomatic mission to Baghdad, a thirteenth-century Jewish minnesinger, a seventeenth-century pogrom in Frankfurt in which gentiles helped to save their Jewish neighbors, and the nineteenth-century innovation of department stores, palaces of consumerism. The book tells a story—moving, terrifying, and exhilarating—that must be remembered.