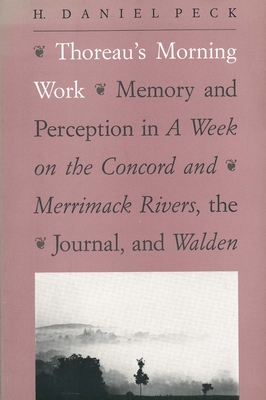 Memory and Perception in A Week on the Concord and Merrimack Rivers, the "Journal", and Walden

A Week on the Concord and Merrimack Rivers and Walden, the only works Thoreau conceived and brought to conclusion as books, bear a distinctively important relation to each other and to his Journal, the document whose twenty-four-year composition encompasses their development. In a brilliant new book, H. Daniel Peck shows how these three works engage one another dialectically and how all of them participate in a larger project of imagination.
"Morning work," a phrase from Walden, is the name Peck gives to this larger project.  by it he means the work done by memory and perception as they act to shape Thoreau's emerging vision of a harmonious universe. Peck argues that the changing balance of memory and perception in the three works defines the unique literary character of each of them. He offers a major reevaluation of Walden, which he sees neither as the epitome of Thoreau's career (the traditional view) nor as an anomaly (the recent, revisionary view). Rather, he sees Walden as a pivotal work, reflecting the issues of loss and remembrance that earlier had found prominent expression in A Week and prefiguring the late Journal's vision of natural order. Focusing on the two-million-word Journal, Peck provides the first critical analysis that defines the essential forces and the imaginative coherence in its vast discursiveness. The consideration of memory and perception in Thoreau also leads peck to the issue of the writer's modernity, and he explores the ways in which Thoreau anticipates twentieth–century thought, especially in the works of such great objectivist philosophers as William James and Alfred North Whitehead.

Praise For Thoreau's Morning Work: Memory and Perception in A Week on the Concord and Merrimack Rivers, the "Journal", and Walden…

"This book makes a major contribution to American literary criticism and Thoreau studies. Peck’s readings are sensitive and original, and he demonstrates brilliantly the intellectual integrity of Thoreau’s thought and writing. Peck’s graceful and lucid style and the attractive, pertinent illustrations make this book a real treasure."—Emory Elliott, Presidential Chair of English, University of California, Riverside

"By following closely their interwoven order of composition, Peck constructs from A Week, the Journal, and Walden a speaking subject called Thoreau, whose intellectual action bridges the gaps within and among these ’completed fragments,’ unifying them processually rather than formally. The Thoreau thus constructed assumes his rightful station among those writers, from Wordsworth to Gertrude Stein, who took it upon themselves to reorder human consciousness in a modern world without beginnings or endings."—William Spengemann, Professor of English, Dartmouth College