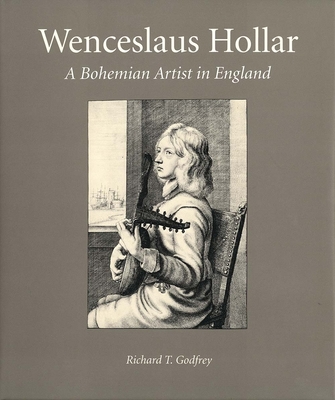 A Bohemian Artist in England

Wenceslaus Hollar (1607-77), a printmaker and topographical watercolorist, was brought to London from his native Prague by the Earl of Arundel in 1636 and became the first great etcher to practice in England. Hollar's range of interests was enormous—from views of London to portraits to costume studies of the fashionable classes to book illustrations. He produced nearly 2,800 prints and numerous watercolors and drawings during his career.

This handsome book portrays Hollar as a fascinating and influential artist with outstanding ability as a draftsman. It begins with an introduction by Richard T. Godfrey that interweaves information about Hollar's life with observations on his technique and artistic context. The book presents Hollar's etchings, watercolors, and drawings in a chronological fashion, beginning with the artist's early views of Germany and the celebrated series of drawings he undertook for the Earl of Arundel, moving to his London years and his book illustrations for publishers there, and ending with his panoramic watercolor views of the British colony at Tangier. Approximately 215 illustrations, most accompanied by full commentary, include not only Hollar's most famous works but also prints and drawings never before published. The book also illustrates works by artists who influenced Hollar, were influenced by him, or were his contemporaries.

Richard T. Godfrey is the Old Master and British print expert at Sotheby's, London.
Loading...
or
Not Currently Available for Direct Purchase