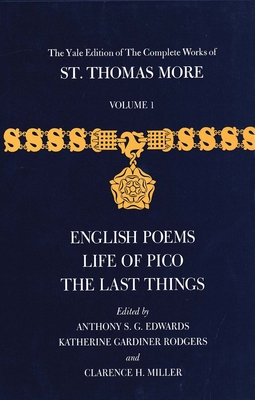 Publication of this volume brings to conclusion the Yale Edition of the Complete Works of St. Thomas More, a thirty-year publishing project of landmark importance in the study of humanism in Western history. The volume contains More's earliest works, probably written between 1492 and 1522, including English poems, a translation and devotional adaptation of Giovanni Francesco Pico's life of his famous uncle Giovanni Pico della Mirandola, and a devotional prose work.
These texts together trace More's earliest career as a humanist through his transition to maturity as a defender of the faith.

The English poems (c. 1492-1494) are lively and experimental works, written at a time when English poetry was in its doldrums. This collection includes verses for a series of painted hangings in More's father's house, a lament for Queen Elizabeth, wife of Henry VII, traditional and sober Fortune verses, and a lively medieval comic poem, "A Merry Gest of a Sergeant and a Friar." The Life of Pico (c. 1510) is very likely More's earliest prose work and is his only extended translation of another writer's Latin into English. The translation is remarkable for its time, when sophisticated Latin was difficult to translate into more primitive English. The Last Things (c. 1522) is an incomplete prose work that re-creates the tradition of writing on death, judgment, hell, and heaven as objects of meditation.
With the publication of St. Thomas More: Selected Poems, edited by Elizabeth F. Rogers (1961), the Yale University Press rated two new editions of the works of St. Thomas More. One is a complete scholarly edition in fourteen volumes; the other a modernized version of selected works in seven volumes. St.Thomas More: Selected Letters is the first volume in the Selected Works; The History of King Richard III is Volume 2 in the Complete Works. These editions, to be published over a period of ten years, are designed to serve as standard reference works for many decades to come. Sponsored by the Yale University Department of English and the Yale University Library, these editions mark a new era in the study of Renaissance literature, history, and religion.

Anthony S. G. Edwards is professor of English at the University of Victoria. Katherine Gardiner Rodgers is research associate for the Yale Edition of the Complete Works of St. Thomas More. Clarence H. Miller is Dorothy Orthwein Professor of English at St. Louis University and editor of several earlier volumes in this series.
Loading...
or
Not Currently Available for Direct Purchase