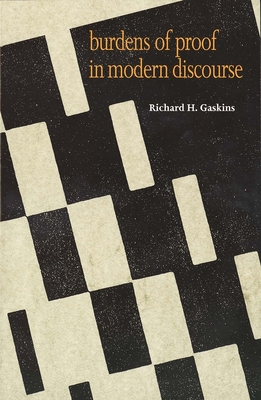 Burdens of Proof in Modern Discourse

Public and professional debates have come to rely heavily on a special type of reasoning: the argument-from-ignorance, in which conclusions depend on the lack of compelling information. "I win my argument," says the skillful advocate, "unless you can prove that I am wrong." This extraordinary gambit has been largely ignored in modern rhetorical and philosophical studies. Yet its broad force can be demonstrated by analogy with the modern legal system, where courts have long manipulated burdens of proof with skill and subtlety.

This legal, philosophical, and rhetorical study by Richard H. Gaskins provides the first systematic treatment of arguments-from-ignorance across a wide range of modern discourse—from constitutional law, scientific inquiry, and moral philosophy to organizational behavior, computer operation, and personal interaction. Gaskins reviews the historic shifts in constitutional proof burdens that have shaped public debate on fundamental rights and, by analogy, on the fundamental status of intellectual and cultural authority. He shows how similar shifts have dominated polemical battles between scientific and ethical modes of authority, affecting both academic and popular discussion. Finally, he discovers the philosophical roots of default reasoning strategies in the arguments of Kant and nineteenth-century Kantian schools.

Concluding that shifting proof burdens are inescapable in a world of scientific and moral uncertainty, Gaskins emphasizes the common strategic ground shared by dogmatic and skeptical reasoning. Using Hegelian strategies, he describes a more pluralistic temper that can move critical thinking beyond polemics and strengthen our capacities for common discourse.