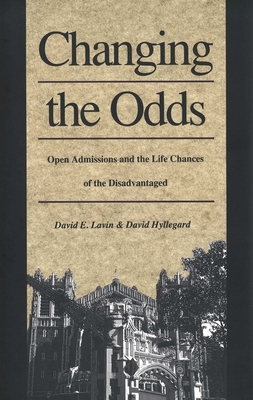 Open Admissions and the Life Chances of the Disadvantaged

The open-admissions experiment at the City University of New York was the most ambitious effort ever made to promote equality of opportunity in American higher education. Initiated in 1970, during the heyday of the "great society," it defined college as a right for all who had completed high school, and it especially aimed to create educational opportunities for disadvantaged minority students. This book evaluates that controversial experiment.

Although critics predicted that the open-admissions policy would sweep away academic standards and result in watered-down degrees of little value, David Lavin and David Hyllegard present data to show that students who graduated were able not only to earn postgraduate degrees at non-CUNY institutions but also to obtain good jobs--far better than the jobs they could have expected without the opportunity open admissions gave them. Indeed, in one year in the 1980s, say the authors, open-admissions students earned $67 million more than they would have if they had not gone to college.

Notwithstanding the successes of open admissions, attacks on it have continued, and, as the book shows, minority access to college has been cut back significantly at CUNY and elsewhere. This book provides ammunition for those who want to challenge emerging policies that narrow educational opportunities for minority students and poor people.

David E. Lavin is professor of sociology at Lehman College and at the Graduate School of the City University of New York. David Hyllegard is Director of Institutional Research at Borough of Manhattan Community College.
Loading...
or
Not Currently Available for Direct Purchase