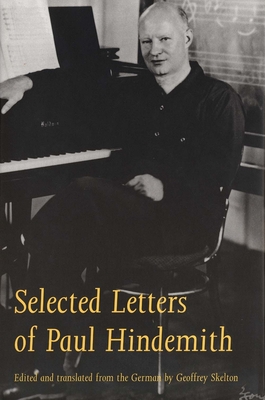 Paul Hindemith had a multifaceted career as an internationally acclaimed composer, performer, festival organizer, teacher, lecturer, and writer. Born in Germany in 1895, he was a leading member of the musical avant-garde, and when the Nazis came to power his compositions eventually were banned as "decadent art." In 1938 Hindemith went into voluntary exile in Switzerland and in 1940 migrated to the United States, where he became a citizen. His return to Europe after the war in response to urgent calls for help in rebuilding European musical life gave rise to many inner emotional problems.

This selection of letters written by Hindemith spans his entire career, from the First World War until shortly before his death in 1963. Translated and edited by a leading authority on Hindemith, the letters (some of which were written in English) reveal that he was an observant, engaging, and opinionated correspondent who took a keen interest in contemporary culture and politics. The first such selection to appear in English, the letters deal with personal and professional matters and are addressed to his wife, publishers, and friends in both Europe and America. Among the many important personalities with whom he came into contact were the composers Stravinsky and Milhaud, the conductors Mengelberg, Furtwängler, Koussevitzky, and Klemperer, and the choreographers Massine and Balanchine.

Published to coincide with the centenary of Hindemith's birth, the letters fill out our portrait of him and provide an absorbing chronicle of his life and times.