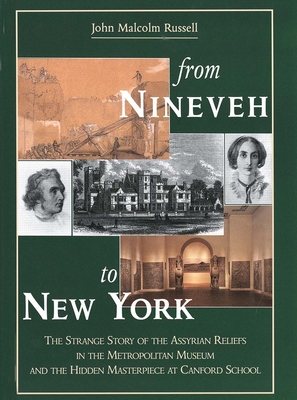 From Nineveh to New York

The story of Sir Austen Henry Layard's rediscovery of ancient Assyria and its fabled capital, Nineveh, is one of the great tales of the nineteenth century, uniting archaeological imperialism, genius, and romance. No less remarkable is the story of the collection, dispersal, and then frantic re-acquisition in the twentieth century of the world's greatest Assyrian collection ever to be in private hands. In this fascinating history of the reception of ancient Assyrian art in England and subsequently in America, John Malcolm Russell recounts the story of the huge collection of artifacts that Layard brought back to England. Much went to the British Museum, but much also to the fascinating Lady Charlotte Guest and then, via a Manhattan dealer and numerous competitive curators and millionaires, to the Metropolitan Museum. The last of Layard's Assyrian sculptures, discovered by the author in a private British school, was sold for $12 million at auction in 1994—a figure that tripled the highest price ever paid for a work of antiquity.

This book is based almost entirely on unpublished archives, including the 10,000-page diary of Lady Charlotte Guest, the brilliant and resourceful cousin of Layard's and the richest woman in England. At her country house, Canford Manor, Guest commissioned from Barry, architect of the Houses of Parliament, the "Nineveh Porch" to display the remarkable sculptures. This established a whole new decorative and architectural fashion for "Assyrian Revival." Russell explores the events that led to the creation of the Porch, casting vivid new light on the archaeological, cultural, and architectural politics of the day.

The dispersal of the collection after World War I, and the initial reluctance of any American museum to acquire the sculptures, form another story—entertainingly illuminated by the ingenious and ultimately successful scheme of the dealer Kelekian to sell them to John D. Rockefeller and others. Assyria's admission to the family of world art, and ethical questions surrounding the appropriation of antiquities, add another strand to the tale, culminating in Saddam Hussein's attempted intervention at the Christie's sale in 1994. With previously unpublished photographs, illustrations from rare nineteenth-century sources, and extensive passages from Guest's diary, this book provides an unprecedented look into the rich history and meaning of Assyrian art and of nineteenth- and twentieth-century taste, dealing, and collecting.

John Malcolm Russell is associate professor of art history and archaeology at Columbia University.
Loading...
or
Not Currently Available for Direct Purchase