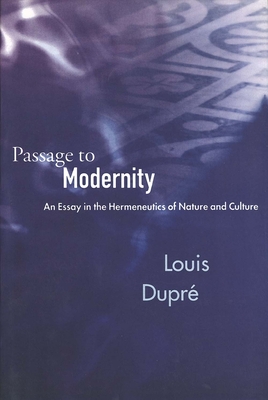 An Essay on the Hermeneutics of Nature and Culture

Did modernity begin with the Renaissance and end with post-modernity? In this book a distinguished scholar challenges both these assumptions. Louis Dupré discusses the roots, development, and impact of modern thought, tracing the fundamental principles of modernity to the late fourteenth century and affirming that modernity is still an influential force in contemporary culture.

The combination of late medieval theology and early Italian humanism shattered the traditional synthesis that had united cosmic, human, and transcendent components in a comprehensive idea of nature. Early Italian humanism transformed the traditional worldview by its unprecedented emphasis on human creativity. The person emerged as the sole source of meaning while nature was reduced to an object and transcendence withdrew into a "supernatural" realm. Dupré analyzes this fragmentation as well as the writings of those who reacted against it—philosophers like Cusanus and Bruno, humanists like Ficino and Erasmus, theologians like Baius and Jansenius, mystics like Ignatius Loyola and Francis de Sales, and theosophists like Weigel and Boehme.

Baroque culture briefly reunited the human, cosmic, and transcendent components, but since that time the disintegrating forces have increased in strength. Despite post-modern criticism, the principles of early modernity continue to dominate the climate of our time. Passage to Modernity is not so much a critique as a search for the philosophical meaning of the epochal change achieved by those principles.