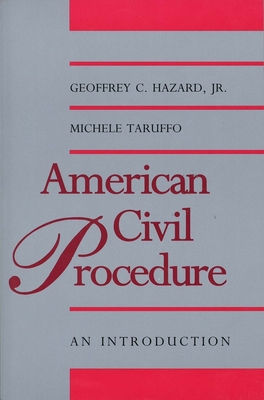 From divorce proceedings to personal injury disputes to lawsuits over busing, affirmative action, and labor relations, most conflicts in American society may eventually find their way into a courtroom. Such civil conflicts, which do not involve violations of the criminal code, encompass both actions between private parties and public controversies.

This clear and direct book by two distinguished professors of law describes and analyzes civil litigation in the United States. Geoffrey C. Hazard, Jr., and Michele Taruffo discuss both specific details and broader themes of American civil litigation, explaining (without legalese) jury trial, the adversary system, the power of courts to make law as well as to "declare" it, and the role of civil justice in government and in the resolution of controversial social issues. Hazard and Taruffo examine the stages of civil procedure, including the lawyers' role in: preparing and presenting cases; the pretrial, pleading and discovery, trial, and appeal process; and procedural variations. They explore the historical evolution of common law and procedure and compare American civil procedure with that in other modern societies in Europe, Latin America, and Japan. They conclude by discussing the economic, political, and moral constraints on litigation, possible innovations to the process, and the political significance of public access to civil justice.

Geoffrey C. Hazard, Jr., is Sterling Professor of Law at the Yale Law School. Michele Taruffo is professor of law at the University of Pavia in Milan.
or
Not Currently Available for Direct Purchase