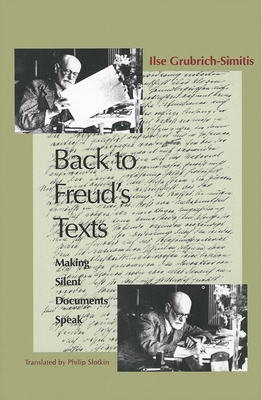 Back to Freud's Texts

This book blazes a trail in Freud research. Ilse Grubrich-Simitis, a prominent authority on Freud, examines and deciphers Freud's original manuscripts—which had remained disregarded for decades. From these she analyzes Freud's method of working and points out what the writings reveal of his psychological states, the events in his life, and the development of his thinking over time. The book is at once a study of Freud's creativity as a scientist and writer, an important reference on the texts themselves, and a commentary on previously unexplored aspects of Freud's life and work.

Examining many hitherto unknown texts, Grubrich-Simitis provides a fresh and authentic picture of the discoverer of the unconscious at work: observing, listening to his patients, gathering the raw material for his oeuvre, fantasizing, drawing conclusions, drafting, rewriting, and correcting. She refutes the legend of the facility of Freud's production, for the notes, drafts, fair copies, and variants she identifies bear witness to the fact that almost every work actually came into being by a process of consuming hard labor. Grubrich-Simitis's analysis of Freud's manuscripts is flanked by two shorter sections on Freud's printed texts: in one she recounts the history of the editions from the beginnings in Vienna to the present day, and in the other she offers a detailed plan for a new historical-critical edition of his works.