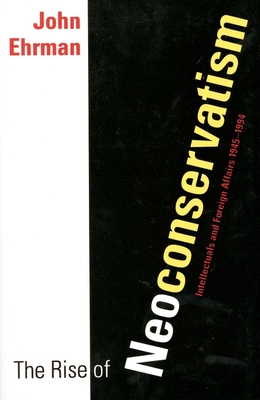 The Rise of Neoconservatism

A small group of neoconservatives—Daniel Patrick Moynihan, Norman Podhoretz, Jeane Kirkpatrick, and others—has had an influence on American politics that far outweighs their numbers. This book is the first discussion of their impact on foreign policy. John Ehrman tells how the neoconservative movement evolved out of the broad anticommunist coalition that dominated American liberalism from the late 1940s to the late 1960s. The neoconservatives continued to advance hardline anticommunism, gradually broke with what they viewed as liberalism's and the Democratic Party's dangerous turn to the left during the 1970s, and regained their influence as part of Reagan's conservative coalition during the 1980s.

John Ehrman traces the neoconservatives' shift from cold-war liberalism to conservatism, focusing on the careers and thinking of the most intellectually and politically important members—especially Moynihan, whose political and intellectual careers are here analyzed for the first time. Ehrman shows how the neoconservatives who held office under President Reagan tried to reinforce the administration's anticommunist outlook while also moving it toward a policy of actively assisting foreign governments and groups trying to develop democratic institutions of their own. Ehrman corrects many misconceptions about neoconservatives, illustrates the differences among them, and traces the consistencies in their foreign policy thinking. He also examines their successes and failures in translating their concepts into political action, and analyzes their place in both modern American liberalism and the conservative movement.