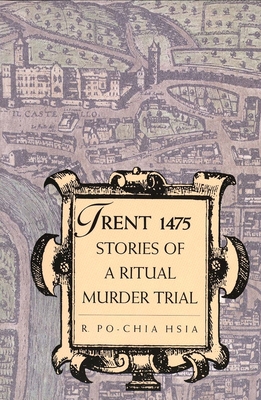 Stories of a Ritual Murder Trial

"A highly readable report of one of the most notorious chapters in the history of anti-Semitism. The book gives the modern historian and the general public access to the stunning spectacle of medieval ’due process,’ the assumptions of the persecutors, and the experiences of the victims."—Heiko A. Oberman, author of Luther: Man between God and the Devil

On Easter Sunday, 1475, the dead body of a two-year-old boy named Simon was found in the cellar of a Jewish family's house in Trent, Italy. Town magistrates arrested all eighteen Jewish men and one Jewish woman living in Trent on the charge of ritual murder—the killing of a Christian child in order to use his blood in Jewish religious rites. Under judicial torture and imprisonment, the men confessed and were condemned to death; their womenfolk, who had been kept under house arrest with their children, denounced the men under torture and eventually converted to Christianity. A papal hearing in Rome about possible judicial misconduct in Trent made the trial widely known and led to a wave of anti-Jewish propaganda and other accusations of ritual murder against the Jews.

In this engrossing book, R. Po-chia Hsia reconstructs the events of this tragic persecution, drawing principally on the Yeshiva Manuscript, a detailed trial record made by authorities in Trent to justify their execution of the Jews and to bolster the case for the canonization of "Little Martyr Simon." Hsia depicts the Jewish victims (whose testimonies contain fragmentary stories of their tragic lives as well as forced confessions of kidnap, torture, and murder), the prosecuting magistrates, the hostile witnesses, and the few Christian neighbors who tried in vain to help the Jews. Setting the trial and its documents in the historical context of medieval blood libel, Hsia vividly portrays how fact and fiction can be blurred, how judicial torture can be couched in icy orderliness and impersonality, and how religious rites can be interpreted as ceremonies of barbarism.

R. Po-chia Hsia is professor of European history at New York University.
Loading...
or
Not Currently Available for Direct Purchase