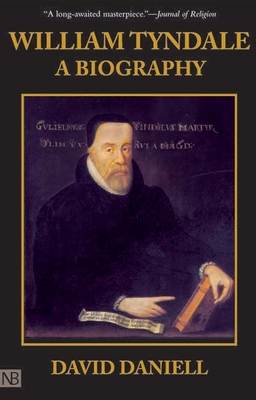 William Tyndale (1494-1536) was the first person to translate the Bible into English from its original Greek and Hebrew and the first to print the Bible in English, which he did in exile. Giving the laity access to the word of God outraged the clerical establishment in England: he was condemned, hunted, and eventually murdered. However, his masterly translation formed the basis of all English bibles--including the "King James Bible," many of whose finest passages were taken unchanged, though unacknowledged, from Tyndale's work.

This important book, published in the quincentenary year of his birth, is the first major biography of Tyndale in sixty years. It sets the story of his life in the intellectual and literary contexts of his immense achievement and explores his influence on the theology, literature, and humanism of Renaissance and Reformation Europe.

David Daniell, editor of Tyndale's New Testament and Tyndale's Old Testament, eloquently describes the dramatic turns in Tyndale's life. Born in England and educated at Oxford, Tyndale was ordained as a priest. When he decided to translate the Bible into English, he realized that it was impossible to do that work in England and moved to Germany, living in exile there and in the Low Countries while he translated and printed first the New Testament and then half of the Old Testament. These were widely circulated—and denounced—in England. Yet Tyndale continued to write from abroad, publishing polemics in defense of the principles of the English reformation. He was seized in Antwerp, imprisoned in Vilvoorde Castle near Brussels, and burnt at the stake for heresy in 1536.

Daniell discusses Tyndale's achievement as biblical translator and expositor, analyzes his writing, examines his stylistic influence on writers from Shakespeare to those of the twentieth century, and explores the reasons why he has not been more highly regarded. His book brings to life one of the great geniuses of the age.

David Daniell is Professor of English in the University of London. He is the editor of Tyndale's New Testament and Tyndale's Old Testament.

Praise For William Tyndale: A Biography…

"Daniell has given us the first substantial book on Tyndale in over fifty years."—Patrick Collinson, Times Literary Supplement

"A massive contribution to the history of the Reformation in England. It is novel and important in its focus upon the language of the English scriptures in the formative period and in its long-range perspective."—J. Enoch Powell, Times Higher Education Supplement

"An important work for all those interested in the history of Biblical translation."—International Review of Biblical Studies

"If you read one biography in the next six months, read this one. It stresses not so much the individual as his times and the impact he had upon them and yet never lessens its grip upon the reader. In the end one comes to admire Daniell as well as Tyndale."—Chronique

"Daniell's work is no mere biography; rather, it is a masterly edition of the scant details of Tyndale's life and an important critique of his numerous literary achievements. Enriched by appendices, chapter notes, an excellent bibliography, and a number of black-and-white illustrations, the book should occupy a very special place on the scholar's bookshelf for many years to come."—Larry W. Usilton, History

"Daniell [is] the world's most prominent authority on the life and labors of William Tyndale. . . . Certain to take a significant place in the biographical literature of Bible translators."—Bible Collector's World

"Stunning both in presentation and content. . . . Daniell carves away the popular myths and reveals an individual of heroic proportions."—Donald Dean Smeeton, Sixteenth Century Journal

"The first full-scale life of Tyndale to appear in 60 years. . . . [Daniell] cares about his subject. . . . [He] makes a compelling case that when we think of the triumphs of the Tudor age . . . we should also recall the achievement of the great literary figure who emerged at the beginning of that splendid era."—Mark Galli, Christianity Today

"An authoritative, compelling, impassioned apologia of William Tyndale, a figure long lost amidst the emphasis on the political and marital maneuverings of the English Reformation. . . . A valuable, brilliant book."—Choice

"This is an excellent publication and an invaluable and indispensable contribution to Tyndale scholarship."—Arthur Long, Faith and Freedom

"A superb book about this important and neglected figure. . . . The book is extremely readable, using analogies especially clear and apt for a modern audience. . . . Reformation scholars will welcome this book and learn from it, as will those interested in translation and the English language, even those who know little about the controversies but can appreciate dramatic events, an appealing hero, and a vividly presented journey in faith."—Stephanie Martin, Wilson Library Bulletin

"Daniell's work is the first comprehensive biography of Tyndale written in sixty years. . . . This is an invaluable resource for teachers and serious students of Church history."—Thomas J. Marinello, The Emmaus Journal

"Concise and clear, a strong introduction for upper-level undergraduates in history and religious studies and also a useful synthesis for scholars."—The Historian

"A good book to read about translation style."—Charles Peck, Notes on Translation

"This biography is to be welcomed as a beautifully written and insightful study of this seminal figure in the English Reformation."—John A. R. Dick, Albion

"A superb book about this important and neglected figure. . . . What gives the book its special power is the passion with which Daniell writes about Tyndale the man and his cause. . . . Reformation scholars will welcome this book and learn from it, as will those interested in translation and the English language."—Stephanie Martin, Snell Library, Northeastern University