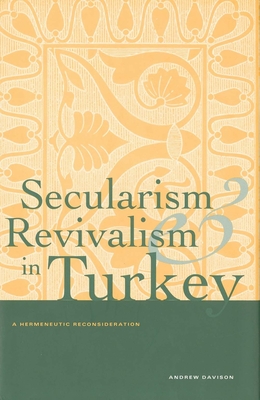 Secularism and Revivalism in Turkey

In this new interpretation of the modernization and secularization of Turkey, Andrew Davison demonstrates the usefulness of hermeneutics in political analysis. A hermeneutic approach, he argues, illuminates the complex relations between religion and politics in post-Ottoman Turkey and, more broadly, between politics and matters of culture, tradition, national identity, and conscience in the modern world.

Led by Mustafa Kemal Atatürk, a modernist Turkish elite in the 1920s wrested political power from an empire in which Islam had exercised great political, social, and cultural power. Atatürk instituted policies designed to end Islamic power by secularizing politics and the state. Through the lens of hermeneutics, this book examines the ideas and policies of the secularizers and those who contested the process. Davison reinterprets the founding principles and practices of a modern, secular Turkey and closely reexamines the crucial ideas of the Turkish nationalist thinker Ziya Gökalp, who laid the conceptual groundwork for Turkey’s Westernization experience. The application of hermeneutics, the author finds, remedies the methodological shortcomings of Western political analysts and provides a better understanding of the processes of secularization in Turkey as well as elsewhere in the modern world.