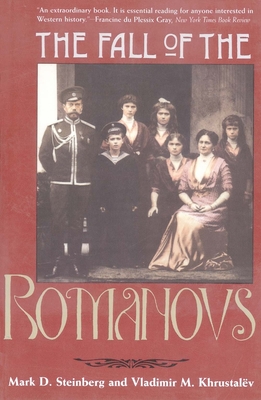 The Fall of the Romanovs

"All around me is treachery, cowardice, and deceit!"—diary of Nicholas II, on the day he abdicated

"Behave with dignity; do not allow the former tsar and his family to be insulted or treated rudely."—Commissar Vasily Pankratov's instructions to the guard, September 1917

"The bullets...ricocheted off [the jewels in the daughters' corsets] and jumped around the room like hail."—Yakov Yurovsky, commissar in charge of the execution of the tsar and his family

The compelling and poignant story of the arrest, captivity, and execution of the last tsar of Russia and his family during the revolution of 1917-1918 has been recounted—and romanticized—for decades. Now a new book explores the full range of events and reveals the thoughts, perceptions, and judgments of the individuals involved—Nicholas and Alexandra, their children, and the men who guarded and eventually killed them.

This deeply moving book is based on documents and photographs from recently opened Russian archives and from Western collections. The documents, which appear for the first time in English (the language in which some of them were originally written), include correspondence between Nicholas and Alexandra during the February 1917 revolution; portions of their diaries; minutes of government meetings, telegrams, and other official papers concerning the arrest, confinement, and execution of the Romanovs; letters written by the captive tsar and his family to friends and relatives; appeals from Russian citizens concerning the fate of the Romanovs; and testimonies by the revolutionaries who guarded and executed them.

Mark D. Steinberg sets the stage for this dramatic saga of revolution in a text that provides engrossing narrative and sensitive exploration of ideas and values and that draws on the whole range of archival and published documents. He and Vladimir M. Khrustalëv also provide notes identifying people and explaining terms. Together, the text and documents challenge the conventional image of Nicholas as weak and witless and of Alexandra as either the preoccupied mother of a hemophiliac heir or as the treasonous "German empress." Instead they tell an ironic tale of individuals whose fatalistic spirituality and unbending faith in an archaic political culture allowed them to fall victim to revolutionaries whose political dreams had yet to be proven false.