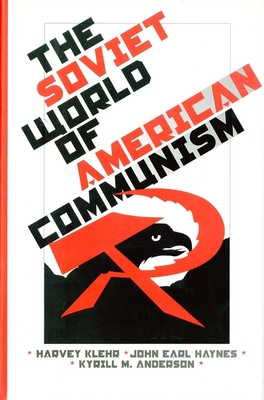 The Soviet World of American Communism (Annals of Communism Series)

The Secret World of American Communism (1995), filled with revelations about Communist party covert operations in the United States, created an international sensation. Now the American authors of that book, along with Soviet archivist Kyrill M. Anderson, offer a second volume of profound social, political, and historical importance.

Based on documents newly available from Russian archives, The Soviet World of American Communism conclusively demonstrates the continuous and intimate ties between the Communist Party of the United States of America (CPUSA) and Moscow. In a meticulous investigation of the personal, organizational, and financial links between the CPUSA and Soviet Communists, the authors find that Moscow maintained extensive control of the CPUSA, even of the American rank and file. The widely accepted view that the CPUSA was essentially an idealistic organization devoted to the pursuit of social justice must be radically revised, say the authors. Although individuals within the organization may not have been aware of Moscow’s influence, the leaders of the organization most definitely were.

The authors explain and annotate ninety-five documents, reproduced here in their entirety or in large part, and they quote from hundreds of others to reveal the actual workings of the American Communist party. They show that:

• the USSR covertly provided a large part of the CPUSA budget from the early 1920s to the end of the 1980s;

• Moscow issued orders, which the CPUSA obeyed, on issues ranging from what political decisions the American party should make to who should serve in the party leadership;

• the CPUSA endorsed Stalin’s purges and the persecution of Americans living in Russia.