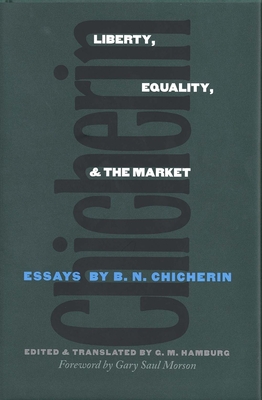 Liberty, Equality, and the Market

This volume brings the remarkable writings of Russian liberal thinker Boris Nikolaevich Chicherin (1828–1904) to English-language readers for the first time. The collection includes key essays in which Chicherin addresses the central political and social problems that confronted Russia from 1855 to the opening years of the twentieth century. Chicherin’s ideological alternatives to the Bolshevik plan for revolutionary transformation of Russia not only provide valuable historical insights, but also are highly relevant to current political discussion of liberalism in Russia and in the West.

In a comprehensive introduction to the book, G. M. Hamburg discusses the development of Chicherin’s thought and places it in historical context. Chicherin, Hamburg says, was a powerful and sophisticated but often misunderstood defender of civil and political rights. Like his fellow liberals in Russia, Chicherin was heavily influenced by German idealism and particularly by Hegel. He departed from many, however, in favoring a market economy and advocating that reform efforts be tailored to local conditions and traditions. In this collection Chicherin explores such contemporary issues as the abolition of serfdom, Russian education, and the need for a constitution. He also tackles broad philosophical problems—the nature of liberty and equality, styles of political discourse—and comments on such philosophers as Plato, Aristotle, More, Machiavelli, Montesquieu, Hegel, and Marx.

G. M. Hamburg is professor of Russian history at the University of Notre Dame.