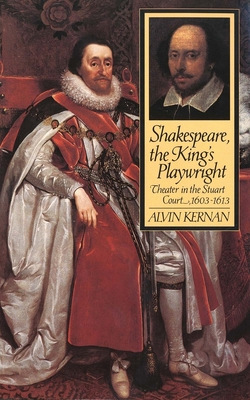 Soon after James Stuart became king of England in 1603, William Shakespeare, while still working in the public theater, became the royal playwright, and his acting troupe became the premier playing company of the realm. How did this courtly setting influence Shakespeare's work? What was it like to view, perform in, and write plays conceived for the Stuart king?

In this fascinating and lively book, one of our most eminent literary critics explores these questions by taking us back to the court performances of some of Shakespeare's most famous plays, examining them in their settings at the royal palaces of Whitehall and Hampton Court. Alvin Kernan looks at Shakespeare as a patronage playwright whose work after 1603 focused on the main concerns of his royal patron: divine-right kingship in Lear, the corruption of the court in Antony, the difficulties of the old military aristocracy in Coriolanus, and other vital matters. Kernan argues that Shakespeare was neither the royal propagandist nor the political subversive that the New Historicists have made him out to be. He was, instead, a great dramatist whose plays commented on political and social concerns of his patrons and who sought the most satisfactory way of adjusting his own art to court needs.

Alvin Kernan is Senior Advisor in the Humanities at the Andrew W. Mellon Foundation. He is the author of many other books, including The Death of Literature and The Playwright as Magician, both published by Yale University Press.
Loading...
or support indie stores by buying on