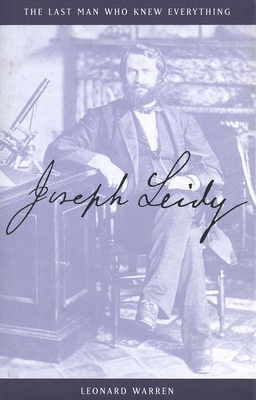 The Last Man Who Knew Everything

Contemporaries of the modest and unassuming scientist Joseph Leidy (1823–91) revered him as the supreme consultant in questions relating to human anatomy, paleontology, protozoology, parasitology, anthropology, mineralogy, botany, and numerous other scientific fields. Leidy’s achievements and the breadth of his scientific interests and knowledge were astonishing. He seemed, in short, to be the man who knew everything.

This is the first published biography of the remarkable Joseph Leidy—a leading American scientist of the mid-nineteenth century, the foremost human anatomist of his time, the first truly productive microscopist, the author of numerous groundbreaking scientific papers and books, and a devoted professor at the University of Pennsylvania and Swarthmore College. An unflagging pioneer and an exceptional illustrator, Leidy was the first in America to use the microscope as a tool in forensic medicine. He established the concept of parasitism in America. He was also the father of American protozoology and parasitology, describing for the first time Trichina in the pig, the source of the human disease trichinosis. As the founder of American vertebrate paleontology, he was the first to describe a dinosaur and many other extinct animals in America. Leonard Warren provides a full account of Leidy’s life and accomplishments and sets them in the social and historical context of Philadelphia and the United States in Leidy’s day. Warren also explores the reasons for the puzzling disparity between Leidy’s fame and recognition during his life and virtual anonymity a century after his death.