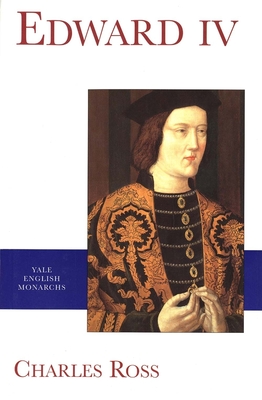 In his own time Edward IV was seen as an able and successful king who rescued England from the miseries of civil war and provided the country with firm, judicious, and popular government. The prejudices of later historians diminished this high reputation, until recent research confirmed Edward as a ruler of substantial achievement, whose methods and policies formed the foundation of early Tudor government.  This classic study by Charles Ross places the reign firmly in the context of late medieval power politics, analyzing the methods by which a usurper sought to retain his throne and reassert the power of a monarchy seriously weakened by the feeble rule of Henry VI. Edward's relations with the politically active classes—the merchants, gentry, and nobility—form a major theme, and against this background Ross provides an evaluation of the many innovations in government on which the king's achievement rests.

Charles Ross was professor of medieval history at the University of Bristol before his death in 1986. Among his books is Richard III, also in the Yale English Monarchs series.
Loading...
or
Not Currently Available for Direct Purchase