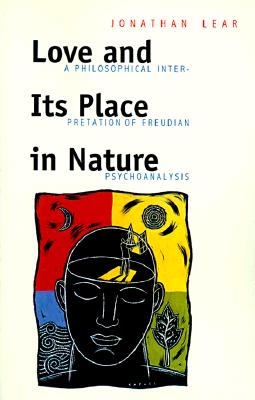 Love and Its Place in Nature

A Philosophical Interpretation of Freudian Psychoanalysis

"Jonathan Lear has shown us both Freud`s texts and his subject matter from a new angle of vision, one that renders much recent controversy about psychoanalytic theory irrelevant. For any student of those texts this book is indispensable."—Alasdair MacIntyre

"Lear makes one understand how psychoanalysis works not only on the therapist`s couch but also as a condition of being alive. . . . Love and Its Place in Nature not only offers a form of spiritual nutriment for the self, it also defines that self with a clear profundity that few readers will have encountered before."—Christopher Lehmann-Haupt, New York Times

"A brief and engaging philosophical perspective on Freudian psychoanalysis. The book is simply written, but important themes are profoundly investigated. . . . An important philosophic reading of Freud."—Don Browning, Christian Century

In this brilliant book, Jonathan Lear argues that Freud posits love as a basic force in nature, one that makes individuation—the condition for psychological health and development—possible. Love is active not just in the development of the individual but also in individual analysis and indeed in the development of psychoanalysis itself, says Lear. Expanding on philosophical conceptions of love, nature, and mind, Lear shows that love can cure because it is the force that makes us human.

Jonathan Lear is John U. Nef Distinguished Service Professor and a member of the Committee on Social Thought at the University of Chicago. He is a graduate of the Western New England Institute for Psychoanalysis and was trained in philosophy at the University of Cambridge and Rockefeller University. Before going to Chicago, he taught at Yale University and the University of Cambridge, where he was a fellow and director of Studies in Philosophy at Clare College. He is also the author of Open Minded: Working Out the Logic of the Soul, Aristotle: The Desire to Understand, and Aristotle and Logical Theory.
Loading...
or
Not Currently Available for Direct Purchase