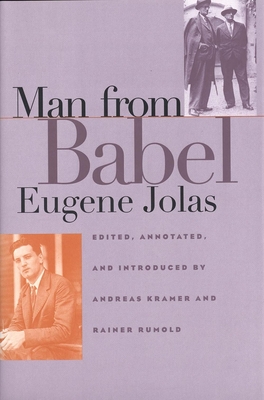 The autobiography of Eugene Jolas, available for the first time nearly half a century after his death in 1952, is the story of a man who, as the editor of the expatriate American literary magazine transition, was the first publisher of James Joyce’s Finnegans Wake and other signal works of the modernist period. Jolas’s memoir provides often comical and compelling details about such leading modernist figures as Joyce, Stein, Hemingway, Breton, and Gide, and about the political, aesthetic, and social concerns of the Surrealists, Expressionists, and other literary figures during the 1920s and 1930s. Man from Babel both enriches and challenges our view of international modernism and the historical avant-garde.

Born in New Jersey of immigrant parents, Jolas moved back to France with them at the age of two. He grew up in the borderland of Lorraine and later lived in Paris, Berlin, London, and New York, where he pursued a career as a journalist and aspiring poet. As an American press officer after the war, Jolas was actively involved in the denazification of German intellectual life. A champion of the international avant-garde, he continually sought translinguistic, transcultural, and suprapolitical bridges that would transform Western culture into a unified continuum.

Compiled and edited from Jolas’s drafts and illustrated with contemporary photographs, this memoir not only reveals the multicultural concerns of the man from Babel, as Jolas saw himself, but also illuminates an entire literary and historical era.

Andreas Kramer is lecturer in German, Department of European Languages, Goldsmiths, University of London. Rainer Rumold is associate professor of German literature and critical thought at Northwestern University, has written books on Gottfried Benn, German Expressionism, and Helmut Heissenbüttel. He is coeditor (with Marjorie Perloff) of the series Avant-Garde and Modernsim Studies.