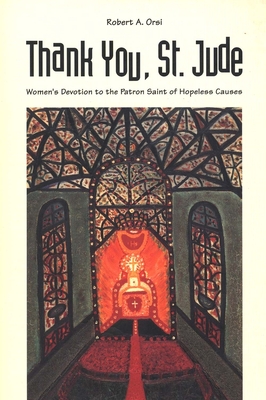 Women`s Devotion to the Patron Saint of Hopeless Causes

St. Jude, patron saint of hopeless causes, is the most popular saint of the American Catholic laity, particularly among women. This fascinating book describes how the cult of St. Jude originated in 1929, traces the rise in Jude's popularity over the next decades, and investigates the circumstances that led so many Catholic women to feel hopeless and to turn to St. Jude for help.

Robert A. Orsi tells us that the women who were drawn to St. Jude—daughters and granddaughters of immigrants from southern and eastern Europe and Ireland—were the first generations of Catholic women to make lives for themselves outside of their ethnic enclaves. Orsi explores the ambitions and dilemmas of these women as they dealt with the pressures of the Depression and the Second World War, made modern marriages for themselves, entered the workplace, took care of relatives in their old neighborhoods, and raised children in circumstances very different from those of their mothers and grandmothers. Drawing on testimonies written in the periodicals devoted to St. Jude and on interviews with women who felt their lives were changed by St. Jude's intervention, Orsi shows how devotion to St. Jude enabled these women to negotiate their way amid the conflicting expectations of their two cultures—American and Catholic.

Robert A. Orsi, professor of religious studies at Indiana University, is also the author of The Madonna of 115th Street, published by Yale University Press.
Loading...
or
Not Currently Available for Direct Purchase