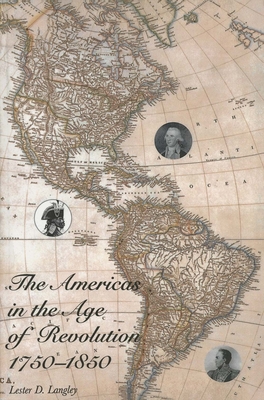 The Americas in the Age of Revolution

This magisterial work is a comparative history of three important revolutions in the Americas: the American Revolution in 1776, the 1791 slave revolt in the French colony that became Haiti, and the prolonged Spanish-American struggle for independence that ended a half century later. Lester Langley describes the movements and events that led to these wars of independence, explaining why revolution took one form in one place and a different form in another.

Langley examines the political and social tensions reverberating throughout British, French, and Spanish America, pointing out the characteristics that distinguished each upheaval from the others: the impact of place or location on the course of revolution; the dynamics of race and color as well as class; the relation between leaders and followers; the strength of counterrevolutionary movements; and, especially, the way that militarization of society during war affected the new governments in the postrevolutionary era. Langley argues that an understanding of the legacy of the revolutionary age sheds tremendous light on the political condition of the Americas today: virtually every modern political issue—the relationship of the state to the individual, the effectiveness of government, the liberal promise for progress, and the persistence of color as a critical dynamic in social policy—was central to the earlier period.

Lester D. Langley is research professor of history at the University of Georgia and the author of many books.
Loading...
or support indie stores by buying on