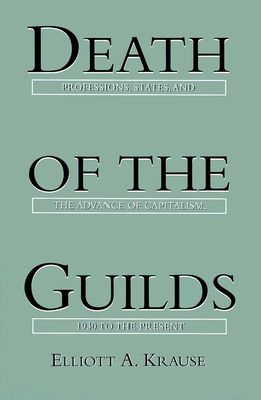 Death of the Guilds

Professions, States, and the Advance of Capitalism, 1930 to the Present

In a uniquely wide-ranging analysis of modern professional group power, Elliott A. Krause looks at four traditional professions: medicine, law, university teaching, and engineering. His richly detailed comparison of the autonomy and leverage these professions wield in five countries—the United States, Britain, France, Italy, and Germany—reveals many differences among the countries and the professions. Yet in the past three decades each professional group in each country has experienced a marked decline in its powers in relation to the state and to capitalist institutions. With a shift toward capitalist control, Krause contends, the professions operate more on a for-profit basis, and increased rationing of services becomes more likely.

For these professional groups, powers such as control over association and training for the profession, over the workplace, over the market for services, and over the group's relation to the state peaked by the late 1950s and early 1960s. After that, Krause's nation-by-nation social historical comparison shows, the actions of states, of capitalist employers of professionals, or of the two together have eroded professional group power. This loss of power, Krause cautions, will lead to fewer benefits for consumers of professional services as providers respond less to consumer needs and more to the priorities of capitalists who arrange the services and determine who shall receive them. And, as the professions surrender non-capitalist values, they become no different from any other occupations.

"Head and shoulders above the work of other scholars, Krause's approach to professions, states, and capitalism is ambitious, sweeping, and indeed original."—Louis H. Orzack, Rutgers University