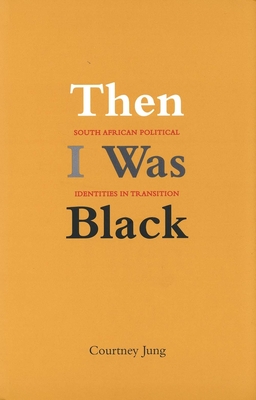 Then I Was Black

Do race and ethnicity present a danger to the consolidation of effective democratic government? Can liberal constitutionalism provide a stable basis for governance of a polity historically erected on racial and ethnic division? In this book Courtney Jung argues that when ethnic and racial identities are politically fluid and heterogeneous, as she finds they are in South Africa, ethnic and racial politics will not undermine the peaceful and democratic potential of the government.

Jung examines three important cases of politicized racial and ethnic identity in South Africa: Zulu, Afrikaner, and Coloured. Working from extensive field research and interviews, she develops a model to explain shifts in the political salience, goals, and boundaries of these groups between 1980 and 1995. Jung challenges the common assumption that cultural identities overdetermine political possibility, pointing out that individual members fail for the most part to internalize the political agenda of “their own” ethnic group. Group engagement with the state is also conditioned by contextual factors, not determined by its constitution in ethnic or racial terms. South Africa is no more divided than most other societies, she concludes, and no less likely to consolidate democracy as a result of its politicized cleavages of race and ethnicity.

Courtney Jung is assistant professor in the department of political science at New School University.
Loading...
or support indie stores by buying on