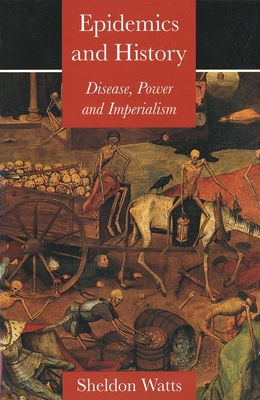 "One of the best portrayals of life in Europe and the Islamic world during the medieval Great Plague. . . . Watts offers solid, stunning examples of Western idiocy that created superhighways for once-obscure microbes, leading to horrendous epidemics. . . . A perspective that Western, particularly Caucasian, policy-makers would do well to comprehend."—Laurie Garrett, Foreign Affairs

"Fascinating . . . [Watts] exposes to daylight the dire effect of the elites' often misinformed conception of these diseases, and how they, the elites, manipulated epidemiological crises to their advantage."—Alfred Crosby,

This book is a major and wide-ranging study of the great epidemic scourges of humanity—plague, leprosy, smallpox, syphilis, cholera, and yellow fever/malaria—over the last six centuries. It is also much more. Sheldon Watts applies a wholly original perspective to the study of global disease, exploring the connections between the movement of epidemics and the manifestations of imperial power in the Americas, Asia, Africa, and in European homelands. He argues that not only did Western medicine fail to cure the diseases that its own expansion engendered, but that imperial medicine was in fact an agent and tool of empire.

Watts examines the relationship between the pre-modern and modern medical profession and such epidemic disasters as the plague in western Europe and the Middle East; leprosy in the medieval West and in the nineteenth-century tropical world; the spread of smallpox to the New World in the age of exploration; syphilis and nonsexual diseases in Europe’s connection with Asia; cholera in India during British rule; and malaria in the Atlantic Basin during the eras of slavery and Social Darwinism. This book will become the standard account of the way diseases—arising through chance, through reckless environmental change engineered by man, or through a combination of each—were interpreted in Western Europe and in the colonized world, and offers an interesting historical perspective for a world dealing with the spread of COVID-19.