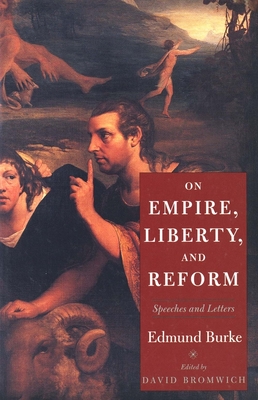 On Empire, Liberty, and Reform

The great British statesman Edmund Burke had a genius for political argument, and his impassioned speeches and writings shaped English public life in the second half of the eighteenth century. This anthology of Burke’s speeches, letters, and pamphlets, selected, introduced, and annotated by David Bromwich, shows Burke to be concerned with not only preserving but also reforming the British empire.

Bromwich includes eighteen works of Burke, all but one in its complete form. These writings, among them the “Speech on Conciliation with the American Colonies,” A Letter to the Sheriffs of Bristol, the “Speech at Guildhall Previous to the Election” of 1780, the “Speech on Fox’s India Bill,” A Letter to a Noble Lord, and several private letters, demonstrate the depth of Burke’s efforts to reform the empire in India, America, and Ireland. On these various fronts he defended the human rights of native peoples, the respect owed to partners in trade, and the civil liberties that the empire was losing at home while extending its power abroad.

David Bromwich is Housum Professor of English at Yale University. He is the author of Hazlitt: The Mind of a Critic and Politics by Other Means, both published by Yale University Press.
Loading...
or
Not Currently Available for Direct Purchase