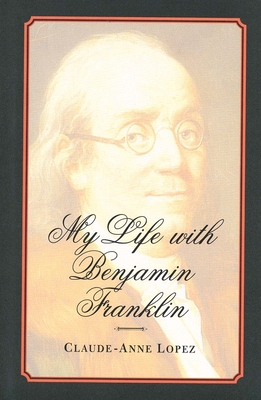 My Life with Benjamin Franklin

This delightful book is a collection of incidental pieces that reveal little-known aspects of the life and personality of Benjamin Franklin. Written by the doyenne of Franklin scholars, it conveys Franklin’s humor, resiliency, courage, and intelligence, and his faith in a better future.

The selections are based on Claude-Anne Lopez’s research in the treasure trove of nearly thirty thousand documents on Franklin assembled at Yale University. They include a detailed refutation of an anti-Semitic forgery attributed to Franklin and currently circulating on the Internet; three mini-detective stories showing Franklin on the fringes of the espionage world; discussions of Franklin’s efforts to outfit Washington’s army and to choose the first dinner set for the Foreign Service; and the tale of the misadventures of a French utopian scheme he sponsored. The only piece of fiction in the book is an imaginary party during which, on the first anniversary of his death, six illustrious Frenchmen discuss Franklin’s influence on their country. Lopez has provided brief personal introductions to each of the pieces, giving her reasons for writing them and in the process threading the essays together.

Claude-Anne Lopez, for many years an editor of The Papers of Benjamin Franklin, is also the author of Mon Cher Papa: Franklin and the Ladies of Paris, published by Yale University Press, as well as many other books and articles about Franklin.
Loading...
or support indie stores by buying on