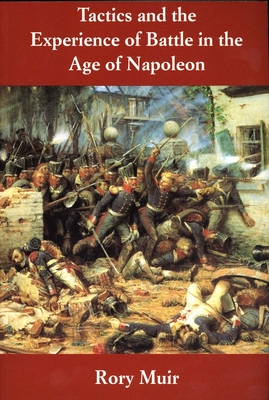 Tactics and the Experience of Battle in the Age of Napoleon

What was it like to be a soldier on a Napoleonic battlefield? What happened when cavalry regiments charged directly at one another? What did the generals do during battle? Drawing on memoirs, diaries, and letters of the time, this dramatic book explores what actually happened in battle and how the participants’ feelings and reactions influenced the outcome. Rory Muir focuses on the dynamics of combat in the age of Napoleon, enhancing his analysis with vivid accounts of those who were there—the frightened foot soldier, the general in command, the young cavalry officer whose boils made it impossible to ride, and the smartly dressed aide-de-camp, tripped up by his voluminous pantaloons.

This book sheds new light on how military tactics worked by concentrating on the experience of soldiers in the firing line. Muir considers the interaction of artillery, infantry, and cavalry; the role of the general, subordinate commanders, staff officers, and aides; morale, esprit de corps, and the role of regimental officers; soldiers’ attitudes toward death and feelings about the enemy; the plight of the wounded; the difficulty of surrendering; and the way victories were finally decided. He discusses the mechanics of musketry, artillery, and cavalry charges and shows how they influenced the morale, discipline, and resolution of the opposing armies. This is a volume that will fascinate all readers with an interest in military history, European history, or the psychology of combat.

Rory Muir is a visiting research fellow at the University of Adelaide. He is the author of Britain and the Defeat of Napoleon, 1807-1815, published by Yale University Press.
Loading...
or
Not Currently Available for Direct Purchase