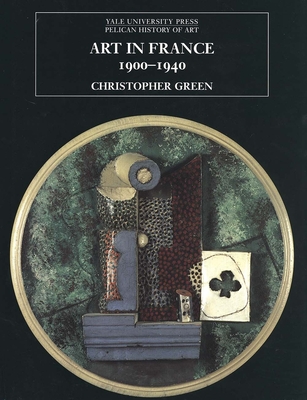 Art in France developed in ways that were of paramount importance to twentieth-century art during the four decades between the Exposition Universelle of 1900 and the invasion of France in 1940. This enormously innovative and informative study of those developments breaks new ground by setting them within the frameworks both of their unstable social, political, and intellectual world and of the official and “independent” institutions of art.

Christopher Green moves from the great Paris Exhibitions of 1900, 1925, and 1937 as representations of France and a critical examination of modern movements—Fauvism,Cubism, Surrealism—to the questions raised by artists’ relationships with the state, the critics, and the rapidly expanding dealer system, as well as the problems met by foreign and women artists making careers in France. In this context, he is able to develop a new analysis of innovation within the practices of artists ranging from Matisse to Picasso and from Duchamp to Dalí, one that pays attention to the reactionary as well as the radical. Major themes are tackled in fresh interpretations of the work produced within these unprecedented developments: modernity, in relation both to technological progress and to gender and social class; tradition and the idea of the nation around the twin traumas of the Great War and the rise of Fascism; and the assault against the ideals of both modernity and civilization launched by artists committed to “the primitive” and to the new, challenging notions of identity and sexuality derived from psychoanalysis.

The book can be a starting point for newcomers to this important field and at the same time opens the subject up in new ways that will engage the more expert reader too.

Christopher Green is professor of the history of art at the Courtauld Institute, University of London. He is the author of Juan Gris, Cubism and Its Enemies, and Léger and the Avant-Garde, all published by Yale University Press.
Loading...
or
Not Currently Available for Direct Purchase