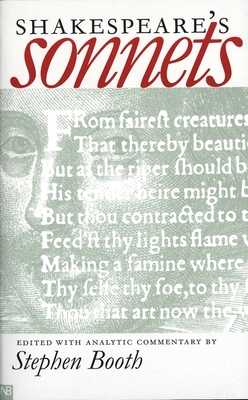 This prize-winning work provides a facsimile of the 1609 Quarto printed in parallel with a conservatively edited, modernized text, as well as commentary that ranges from brief glosses to substantial critical essays. Stephen Booth’s notes help a modern reader toward the kind of understanding that Renaissance readers brought to the works.

Stephen Booth is at the University of California, Berkeley.

"Explications and analyses that will greatly enhance a reader’s understanding and enjoyment."—New York Times Book Review (on an earlier edition)
"The engaging commentary—with its wit, energy, and sane conviction—makes a plea for a reading of the sonnets that values meanings which may not be intellectually convenient or the basis of a unified interpretation. For purists, the Quarto text is printed parallel to the modernized text."—Library Journal (on an earlier edition)
"This edition of the sonnets is a heroic enterprise. . . . [Booth’s] annotation does far more than any previous edition to show the fantastically rich way that Shakespeare exploits the verbal resources of his culture. . . . No serious reader of the sonnets will want to do without Booth’s edition."—C. L. Barber, New York Review of Books (on an earlier edition)
"Booth’s edition, like Shakespeare’s sonnets, is something of a miracle. His extensive commentary, like the poems it describes, is a dazzling commixture of intricate detail, multiplicity, bombast, bawdiness, suppleness, and grandeur. . . . [It] will enlarge and alter its reader’s experience—of the sonnets, of the plays, and of other texts as well."—Carol Thomas Neely, Modern Philology (on an earlier edition)
"May well become a standard, incorporating as it does in one volume much of what is needed for a serious study of the sonnets. . . . Anyone from advanced undergraduate to scholarly specialist will probably make this book one of his first references on matters concerning the sonnets of Shakespeare."—Choice (on an earlier edition)
"Undoubtedly, this edition constitutes a landmark in Shakespearean criticism. . . . [It] is a work of first-rate importance, hopefully a precursor of a long-needed revolution in our understanding of reading Shakespeare."—G. F. Waller, Dalhousie Review (on an earlier edition)
"Refreshingly different, Professor Booth's book reduces the usual questions about biography, dating, and ordering the poems to six pages of an appendix, while the four hundred pages of notes continue the exciting amplification of possibilities in reading that he began in his well-received An Essay on Shakespeare's Sonnets. . . . There is little question that the reader will return to the poems with greater sensitivity to their possibilities, to echoes, to patterns that make them richer than before."—Shakespeare Studies (on an earlier edition)
Winner of the ninth annual James Russell Lowell Prize given by the Modern Language Association (MLA)
Winner of the 1978 Explicator Literary Foundation Award
"The book seems to me to be indispensable to the serious student of Shakespeare's Sonnets, as well as being a repository of relevant information and sound critical sense for 'the common reader' who wants to deepen his understanding and enjoyment of these remarkable—and often baffling—poems."—L. C. Knights (on an earlier edition)