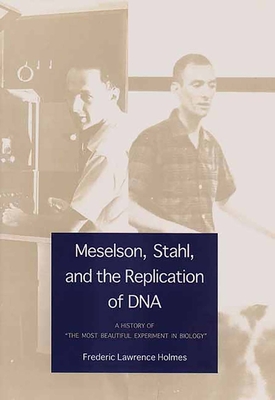 Meselson, Stahl, and the Replication of DNA

A History of "The Most Beautiful Experiment in Biology"

In 1957 two young scientists, Matthew Meselson and Frank Stahl, produced a landmark experiment confirming that DNA replicates as predicted by the double helix structure Watson and Crick had recently proposed. It also gained immediate renown as a “most beautiful” experiment whose beauty was tied to its simplicity. Yet the investigative path that led to the experiment was anything but simple, Frederic L. Holmes shows in this masterful account of Meselson and Stahl’s quest.

This book vividly reconstructs the complex route that led to the Meselson-Stahl experiment and provides an inside view of day-to-day scientific research--its unpredictability, excitement, intellectual challenge, and serendipitous windfalls, as well as its frustrations, unexpected diversions away from original plans, and chronic uncertainty. Holmes uses research logs, experimental films, correspondence, and interviews with the participants to record the history of Meselson and Stahl’s research, from their first thinking about the problem through the publication of their dramatic results. Holmes also reviews the scientific community’s reception of the experiment, the experiment’s influence on later investigations, and the reasons for its reputation as an exceptionally beautiful experiment.